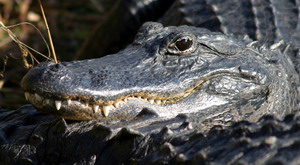 There is a park within Everglades National Park called Shark Valley. It is a very nice place to see natural Everglades. There is a paved fifteen-mile loop road which may be walked or bicycled and no motorized vehicles are allowed. To elevate the road, a canal was dug on the outside perimeter of the trail and an observation platform is at about the midway point. Alligators retreat into the canal for most of the time. They are not easy to spot. Usually you look for eyes and nostrils.

When my daughter was about eleven, her uncle and I took her on a trip around the loop on bicycles. It was a cold day in February, about thirty-eight degrees and very clear. The alligators’ metabolism is slowed by this great drop in temperature and that day many had crawled out onto the blacktop to try to recover some heat. By many, I mean about seventy.

There were alligators everywhere. Most were between seven and fourteen feet in length. There was almost no movement among the beasts. They looked like giant, black rubber gag alligators and their eyes were open. The Rangers had warned everyone, as I am sure they do in Yellowstone. Still there were foolwits posing for pictures dangerously close to the animals, as I am sure there are many people mauled each year by Grizzleys while trying to get a snapshot of themselves with their arm around Yogi. Unfrickinbelievable.

We sure didn’t tell the Rangers that we had guns in our packs but I wasn’t about to go into the actual Everglades unarmed with my daughter. FOX News just showed a quick shot of an alligator being caught in some Texas Suburb. Curiously, I had seen it earlier on NBC Today Show. [Don’t ask. I was taking something to my Mom and she cannot live without Katie, Matt, Al and Ann.] Matt warned that the homemade video would be ‘disturbing’ and cut to Soledad O’Brien who narrated the piece.

An alligator which appeared to go twelve feet or bigger was in the middle of some Pleasant Valley street. The street was two-laned and curbed. The whole neighborhood had turned out to watch and videotape the creature. Some expert had been called and arrived to deal with the beast. What the citizens expected the expert to do, I have no idea. Maybe flip it on its back and put it to sleep by rubbing on its tummy the way they do in shows out at Seminole Village. What the expert did was lassoo the gator very expertly from a safe distance, knot the safer end of the rope to the trailer-hitch on his pick-em-up truck, drag the gator a safe distance from the kids and houses and shoot him dead. Very good. In my neigborhood, we would have begged the expert for the carcass so we could harvest the hide and barbeque the tail but in Houston? Naw. The hissies pitched a mommyfit. Solidad went senseless. I thought they were gonna have to call 911 to rescue Al. Surely he, among all of them, would be dreaming of gator steak.

The Texas Wildlife Department is apologizing now on FOX. What iceholes. Wonderful lesson for kids to see dangerous animals killed. But… Nooooooo! Here in Dade County a guy used a .22 rifle to kill a giant iguana which had gotten into his fenced dog-run. He was arrested and charged with animal cruelty and illegally discharging a firearm. This country has become the sluice-pit of Nannystateism. People cannot be trusted to make any decision and must wait for the Authorities to deal with each codified notion. Now even the Autorities can’t be trusted to deal sensibly. Better a child should be eaten than a wild and dangerous beast [who probably would not have suffered scuff marks had the expert dragged him to Thibodaux, Louisiana] have a rope put around his neck. A rope? Dragged behind a truck? In Texas? We all know what THAT means!

I will pose a question. Would the Nannymommies have got themselves conflicted had the alligator been discovered coughing up the hide of somebody’s Shar Pei? What to do?