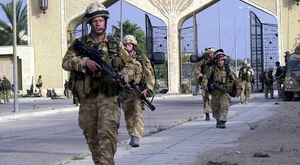 I give the Pentagon high marks for originality and low marks for practicality on their concept of press relations for the Iraq War. The idea of assigning ie “embedding” reporters in US forces has a certain surface appeal to military folks, who prefer things to be lined up, easy to understand and in a word manageable. And while the press appears to be willing to go along, I think the natural inclination of most reporters to run at the sound of the fire bell is going to overcome the best intentions on both sides of the divide.

First, we have to realize that the model of WWII combat reporting is no guide for dealing with today’s media. Reporters in the 1940s (and that’s mostly what they were print reporters who filed dispatches) were on board, with the program so to speak. They were there to tell the story of Iowa farm boys and Brooklyn kids who were destroying international evils. There was no question in anyone’s mind that the allies were the good guys. And if you are at all familiar with the work of these (mostly) men, you recognize immediately that the story they were telling was a human story, an American story. They were, not to put too fine a point on it, writing for the family and neighbors of the boys doing the fighting. And they were subject to censorship. Locations like “somewhere in France” or “the North Atlantic” were common. There was no demand on the part of the press or the public for specific knowledge of locations or unit identifications.

But this was a world where information moved at a much slower pace. Wire service reporters (men like Walter Cronkhite) were expected to provide a fairly frequent stream of copy that would be published across the nation. But those pieces were smallish, nothing more than bulletins, describing operations that had taken place (by the time they were transmitted) days or even as much as a week ago. Photos and newsreels (mostly from the Signal Corps) lagged the news by weeks and even months. Film had to be processed, transported to places like London and the shipped by air to New York where teams of editors would splice thousands of feet together for distribution to the nations theaters.

Radio was the most immediate medium. But the technology required for a remote broadcast was clunky, unreliable and delicate. Edward R. Murrow was able to broadcast from a roof in London only because he was on the roof of his studio in London. A fixed facility connected to telephone cables across the Atlantic. Most W.W.II radio broadcasts were actually recorded in the field on records and then transported to cities like London were they could be sent over the telephone lines to the US.

All that’s changed today. Communication through inexpensive satellite uplinks and digital devices add a significant challenge to managing the press during wartime. I think it best that the military services admit defeat in their goal of managing the information flow and instead focus on what they can manage. The Vietnam model, while I shudder at that thought, is probably the one most likely to avoid all the pain and suffering potential of “embedding” the press. Ideally, the press wants ultimate freedom, and considering how out manned and outgunned the military will be (they do have other jobs you know) it’s best to capitulate now. In return for their freedom, the military can and should enforce a different kind of discipline on the press.

Nobody with any sense wanders around a modern battlefield. It may appear vast and desolate but it is a highly dangerous place. It’s amazing how much danger lurks in the empty places of a field of combat. This works to the advantage of the military. You see, in the final analysis, the media will be dependent on the services for protection, support and cooperation. Herein lies their weakness as an organization. Go back and read the first sentence of this paragraph again.

What I propose is a very simple program that gives maximum freedom to the press and maximum flexibility to the military.

I think this would be a good start.