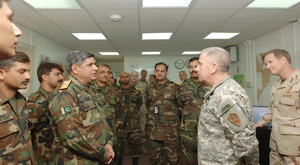 While I give the military decent marks for press relations to date, one thing they’ve neglected at their peril is to make clear what they actually mean in some cases. To wit, in military parlance there is a significant difference between the verbs seize, secure, occupy, clear and control. This has caused substantial friction between the military, the press and the public.

You tend to seize specific geographical features, a ridge line, a bridge, an oil platform. You tend to occupy geographical areas, a valley, a city, a beach head, a mountain range. An occupied area is not necessarily secure from enemy action. That can only be done by clearing the area. You can control an area through fire and observation. From the ground, from the air or a combination of the two.

Please Centcom, be specific and explain what you mean when talking to people in the press and public.

Embedded reporters are the best

Reporters traveling with our combat troops are meeting the test. They live, eat, sleep and move with our soldiers. They have become, for lack of a better term, part of the team. Why is this important? Because they are operating just like reporters did during WWII. Men like Ernie Pyle spent long and arduous days and weeks tramping along beside the dogfaces of infantry companies. They shared their food and their fellowship and the insight they gained enabled them to provide unvarnished descriptions of life at the keen edge of the spear.

Warfare is not glamorous, but the actions of every day Americans can be heroic and inspiring. I am confident they will not hesitate to relate the unpleasant truths of combat. But the feeling of camaraderie this program fosters gives the men and women who do the tough work of soldiering an honest break from the rampant cynicism of modern media reporting.

Never forget, that Joe Galloway who covered the battle at LZ X Ray with the 1-7th Cavalry, has since then been considered one of the veterans of that battle. And all Joe did was take photos and report the hard facts of life in that particular cauldron.

Time is On Our Side

According to reports the execution squads of the regime are already combing the rear areas looking for deserters. This is the first symptom that the enemy forces are near the breaking point. Compare and contrast, in 1944 the Germans launched a surprise offensive in the Ardennes. Hundreds of small combat actions by US Army units, from infantry battalions to engineer companies, contributed to the delay of the German spearheads. Artillery units leveled their howitzers and fired down lanes at point blank range. And some of our troops ran away.

But US forces didn’t round up the run aways and shoot them. Or hang them from lamp posts “pour encourager les autres”. No. They collected them up, armed them and organized them into ad hoc infantry fighting units. In the spring of 1945, Hitler issued orders creating the infamous “flying courts martial”. Small groups of executioners whose brief was to stop soldiers heading to the rear (not just running away), administer a quick “trial” and then death for the offenders. Thousands of German officers and soldiers who had legitimate reasons to be transiting to the rear (resupply, messengers etc) were shot or hanged for the crime of not having the correct pass. In some cases even General Officers were shot out of hand for being in the wrong place at the wrong time.

No force that is kept in place with guns pointed at their backs will stand against a determined and violent attack.

I’m Not One for Luck

But, don’t you think it’s a good omen that the commander of V (US) Corps is name: William Wallace.

Maybe Mel Gibson can play him in the movie.

Patience is a Virtue

The AF may have run out of targets in Baghdad, but there are plenty down south. JDAMs, ATACMs, Hellfires, Mavericks, TOWS, a whole 21st century volcano is beginning to envelope the Republican Guard divisions below Baghdad.

I expect that the timeline runs something like this.