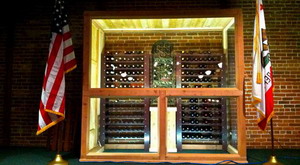 ‘The Old School House’ is a painting in my living room. It is not modern art and it looks very like an old school house. I bought it from a friend of mine who painted it. Bruce Alan Bradfied Fraleigh grew up in Coconut Grove. His father was a Captain for Braniff Airlines. A mutual friend is hosting a show for Bruce in his Miami Beach home. I am the first to buy a painting. Comes now to the party Geoffrey Pietsch. Geoff is a good friend. He was our cross-country coach in high school. Geoff remains an old-style labor leader communist. I have tried to get Geoff to join in at GIGO many times. We talk about old times. Geoff taught us all. He taught us American History. I keep the texts he used close by. ‘The American Pageant’ is by Thomas A. Bailey of Stanford University. Its companion books, two paper-back volumes titled ‘The American Spirit’ contains reprints of contemporary writings and documents.

Wanting to write something for Gigo today, last night I took out the hornbook to see what Prof. Bailey had to say about Casto in his Third Edition (1966). One page. Plenty on the Missile Crisis. Here it is. All of it. Three paragraphs.

“Soviet propagandists had meanwhile been making alarming inroads among our hemispheric neighbors. The Latin Americans were resentful at our lavishing billions of dollars on Europe while doling out only millions to the poor relations to the south. Liberals were outraged by our willingness to support – even decorate – bloody dictators who would insure the scarcity of dollar investments. And the American recession-depression of 1957-1958, combined with the Yankee tariff barriers, further tightened the screws.

“The ill-timed ‘good will’ tour of Vice President Nixon through South America in 1958 reaped a harvest of ill will. Communist agitators and others became increasingly violent. After being stoned, spat upon, and shouted down in Lima (Peru), Nixon narrowly escaped serious physical injury at Caracas (Venezuela). Decent Latin Americans were apologetic, but one of them explained that since the masses could not vent their anger by spitting on the United States, they spat on the Vice President of the United States.

“Most ominous of all was the Communist beachhead in Cuba. The iron-fisted dictator Batista had encouraged huge investments of American capital, and Washington in turn had given him some support. When the black-bearded Dr. Fidel Castro engineered a revolution in early 1959, he denounced the Yankee imperialists and began to expropriate valuable American properties in pursuing a land-distribution program. Washington, finally running out of cheeks to turn, released Cuba from ‘imperialistic slavery’ by cutting off heavy imports of Cuban sugar. Castro retaliated against this ‘imperialistic aggression’ with further wholesale confiscation of Yankee property, and in effect made his left-wing dictatorship an economic and military satellite of Moscow. Further deliberate affronts prompted Washington to break diplomatic relations with Cuba early in 1961.”

Wow. So. Let’s see what Prof. Bailey chose to include from contemporary writers:

Wow, again. I seem to remember… I’ll let it go. My Google/Yahoo! search reveals that Prof. Bailey was slouching around Stanford as late as 1997 and his text (Eleventh Edition) is now college textbook – American History being no longer taught in high school.

Perhaps I’ll mosey over to UM library and see what he chose to include about Vietnam or perhaps the tears he wept over the Berlin Wall.

I must tell you that Geoff Pietsch was a straight teacher of American History. He had plenty to say about Vietnam but to know his personal politics, you had to speak to him privately.

He retired in 1999 and lives in Gainseville, Florida not far from where Bruce Fraleigh paints.