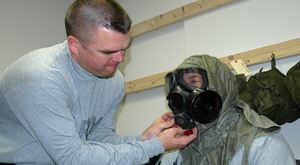 Saddam Hussein might deliberately destroy his biological and chemical arsenal so that when our troops arrive there will be no “proof” that he ever had them.

Sure, in the mind of the tin foil chapeau crowd this has a certain logic. But it assumes away a good deal of difficulty in actually carrying out this caper. The US military has spent the past 20 years and countless bazillions of simoleons developing the means to eliminate our chemical weapons stocks. It’s not such an easy thing to do. Granted their mission has been to destroy these weapons so that the residue is harmless, but even then there is still residue.

How would one go about destroying the evidence so as to indict the allies as evil vile pre-emptive aggressive warriors with no case? You could load all of your weapons into bunkers or tunnels and wire them with explosives, very powerful explosives. Then set them off. If your engineers are really good at their jobs you might even get 100% destruction of all the containers, bombs etc. But what you have left is a rather large mess. If we can take a cell from the inside of someone’s mouth and come up with a DNA sequence, what makes you think we can’t take a glob of goo from some Iraqi tunnel and do some basic chemical analysis?

There will always be residue

Hussein will contaminate his troops with anthrax or small pox and then they will surrender creating a diabolical choice for our military: kill them all or isolate them. In either case we will be attacked for committing war crimes.

Poisoning your own troops is not exactly easy. Do you require them to march through a field shower? Put it in their food? Issue special “anti lice powder”? Any method of infecting your troops directly requires an infrastructure. All it would take is one man with a conscience to hint to his cousin or boyhood friend, “Don’t drink the water. You’re not thirsty.”

Then you have the matter of incubation. Infect the troops too early and they die before the attack, infect them too late and the war might be over before the outbreak. And exactly how contagious can these diseases be? Small pox requires physical contact, so does anthrax. Something like typhus might be more effective, but it is also very treatable with anti biotics.

Our forces face any number of real world problems, let’s not go off the deep end worrying that the space aliens will intervene to save us.