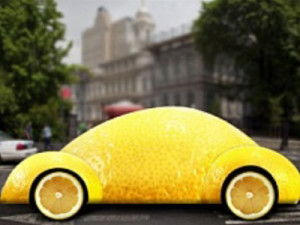 Have you ever heard of a car being referred to as a “lemon”? Have you ever wondered what this actually means? Hopefully, as a consumer, you haven’t had much if any experience of this kind with a vehicle. By its most basic definition, a lemon – in terms of consumer goods – is a vehicle (or more broadly, any product) that has suffered from too many manufacturing defects to serve its intended purpose. These defects often have a dramatic impact on the safety, value, and the product’s overall performance.

The question that is generally asked at this point is how to tell if your vehicle actually can be considered a lemon. It’s easy enough for a car to have normal wear and tear or to suffer some sort of damage as the result of an accident or neglect on part of the driver. It’s also easy enough for a service station or a repair shop to fail in fixing the problem on their first try (as much as many might like to believe otherwise). So, how is it that anyone can tell their car is a lemon in the first place?

According to contemporary lemon laws, there are actually a number of criteria that must be met in order for a car to be classified as a lemon at all:

There is no real time frame to be considered in this way, though one source liberally suggests that a reasonable number of attempts to repair the problem should be made within two years of the vehicle’s original purchase (meaning by its first-time owner if it is a used vehicle) or after 18,000 miles of use, whichever is to come first.

It should go without saying that waiting too long and letting the problem becomes exacerbated by normal wear and tear increases the risk of damage to the vehicle itself and reduces the possibility of discovering whether the vehicle was originally a lemon.

Some sources suggest that the vehicle’s repairs must be attempted at least twice by the same dealer or manufacturer in order for the Lemon Law to become at all applicable.

The length of time that a car remains out of service due to required repairs can have an impact on its classification as a lemon. A car that remains off the road for repairs for a period of at least 15 business days can be subject to the Lemon Law.

These specifications are more geared toward new vehicles being sold off the lot of prominent dealerships. When attempting to apply these guidelines to used and resold vehicles, though, the term “buyer beware” comes into play quite heavily. Luckily for modern consumers, services that generally include a vehicle’s history since its original purchase are relatively easy to come by, which can greatly assist in avoiding an accidental purchase of a lemon. Though, despite this, there have been some manufacturers who attempt to circumnavigate these safeguards by less-than-savory methods. This makes researching a vehicle on one’s own and having an independent repair shop inspect the vehicle especially important for the sake of safety and understanding a vehicle’s value.

As a general rule, many sources consider three attempts of repairing the same problem on a vehicle to be reasonable before it can be considered a lemon. Granted, these attempts to repair the problem must be made within a general time frame (as stated above) in order to show evidence toward an actual defect by the manufacturer rather than allowing for the possible presumption that the vehicle was simply suffering from the usual wear and tear over a given period of time. Once that criterion and the others are fulfilled, then the vehicle may be subject to the Lemon Law.