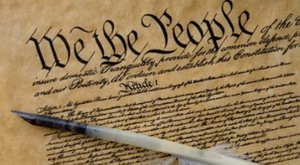 The Founding Fathers (copyright 1776) produced the US Constitution as the framework of a national federal government. The Constitution was unique at the time because The Framers (copyright 1787) spent a good deal of time and energy analyzing and critiquing the various failed “republican” experiments of history. The end product of the Constitutional Convention was a compromise document which, in their belief, balanced the powers among a new federal state, the existing states and the people at large.

Why was it a compromise? Because the men who wrote it were not a group of ivory tower theorists, they were experienced politicians. They produced a framework that would be acceptable to the various interest groups. The addition of the Bill of Rights was a final concession to the Anti-Federalists (men such as Patrick Henry) who feared that the concept of enumerated powers was a good theory but a poor practice.

Madison has been rightly celebrated as the motive power behind the Constitution. He, Hamilton and Jay engaged the public in a series of explanations (collected together as The Federalist Papers) in justifying the document and explaining both the advantages and pitfalls of the construct. These men shared a common vision of what the Constitution ought to be. If anyone could be said to be capable of defining “original intent”, surely it would be Madison and Hamilton.

Within 10 years of its adoption, Madison and Hamilton were sworn political enemies. Each dedicated to pursuing his own interpretation of the basic law. Hamilton called for a muscular and “liberal” implementation of federal powers. Madison diligently opposed federal supremacy in all but a few limited areas. At least until the Democratic-Republicans came to power.

So what does this tell us? Two men instrumental in writing and adopting the Constitution came out in the end in two different places.

How can that be?