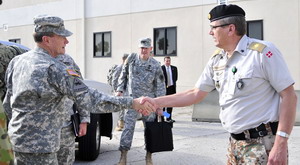 I expected the campaign to unfold almost immediately, you don’t get your forces locked and cocked and then sit around in your attack positions. This is exactly the thing that might cause the troops to lose their fighting edge, you can’t continue to rev up their adrenaline levels and then let them down without beginning the process of fatigue.

If the troops moved out in the knowledge that they would be in their positions for say 24 or 48 hours then that would be different. The units could have been told that H Hour was NET (no earlier than) and the commanders would have been given some tasks to perform ranging from leader recons of the terrain (never underestimate how important it is to actually see the ground in person) to clearance of approach routes and marking of obstacles and bypasses. They could also be shifting over to a night schedule. When they closed on their attack positions they went to sleep with minimum security, perhaps provided by friendly forces not making the initial assault.

The question of timing is an open one. It may very well be H Hour is contingent on other actions, including but not limited to destruction of front line missile and artillery units, surrender arrangements, insertion of Kurdish/Shia guerilla units, Special Forces etc. The motto on the crest of the 505th PIR (parachute infantry regiment) is “H Minus”, alluding to the regiments first combat drop in Sicily timed at 4 hours before the main landings, H minus 4.

It’s notable that the press is commenting on our ability to “improvise” RE: the decapitation strike in Baghdad just after the ultimatum expired. I’m not impressed, at least not in that way. American soldiers have always been able to improvise, it’s one of their strengths, it’s not something you can teach per se, but it is something all levels of leadership encourage. As a former war planner, I imagine Centcom’s shelves are stacked with contingency plans, including that sort of precision (not surgical) strike on leadership targets. You pull it off the shelf, fill in the blanks, make the coordination and give the orders.

I’m not saying this is a lay down to pull off, just that we do this sort of stuff for a living.

Did we get Saddam? Who knows. I doubt even the CIA knows the answer to that. We may not know until after the war is over. Maybe we only got a few of his henchmen. But I think it was a nice bold stroke that sets the tone.

At this point we just have to wait and see what develops.