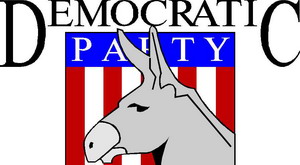 In recent years, and increasingly so in the current contretemps, the Democratic Party has shown itself to be, in essence, an opposition-only party. Now this may seem natural given the fact that the Republican Party has majority representation in the elective branches of the federal government, but they were acting this way even prior to the 200 elections.

For example, leading Democrats decry the proposed (and passed) tax cuts yet do not offer any substantive counter offer but the status quo. Similarly, Democrats seemingly are in favor of stasis regarding Social Security, national defense, and foreign relations. Now I will admit to a quick TV remote control finger when most any liberal shows up on the screen, but I am well read and informed and still cannot identify any real Democratic proposal other than objection to President Bush and the Congressional majority.

I have a theory

The Democrats have achieved all of their reasonable goals and now have the task of defending their claimed victories. Alternately, they can press onward into territory where few Americans will follow. We have, as the result of years of Democrats’ success, federal involvement in local schools along with union domination of their operation, abortion on demand, racial preferences, nearly open borders, social engineering and income redistribution through tax policy, and amorality and the social standard.

Existing well past your point of diminishing returns is a problem for just about any organization based on a Movement. Labor unions were initially a force for good. They served to put the owners of labor (workers) on more even footing with the owners of capital. The result was increased safety, pay, and productivity. Alas, once these goals were achieved, the labor unions devolved into organizations dedicated to their self-sustenance. Pay and benefit demands became severe enough to bankrupt companies either slowly through uncompetitive contracts, or more quickly by enacting strikes. Unions enrolled government workers and have converted a goal of protection against political power into political power itself.

Similarly the civil rights movement began as a moral force against institutionalized racism. As it achieved those goals, it has become a caricature of itself by now supporting racialist quotas and promoting black separatism. Having achieved equality before the law and having changed the hearts of the vast majority of fellow citizens, the civil rights movement needs to keep moving the bar so as to have a reason to exist. Jesse Jackson needs grievances in order to raise cash.

The women’s rights movement began with the moral suffragette argument that female citizens should have the same civic opportunities as men. From that noble vantage we have Martha Burk harassing a private institution that chooses to have only male members.

The Democratic Party at one time had valid political goals that were compatible with the U.S. Constitution and aspirations of the citizens. After those goals were reached, it also managed to accomplish quite a list of achievements that are arguably outside a fair reading of the Constitution’s intent. Now it is faced with the prospect of maintaining those goals while searching for some new Big Idea from which it may regain relevance. As it is, the Democratic Party is simply a collection of all of the movements that have outlived their need. They have nowhere to go without a radical redefinition of what it means to be American. Although many of the leaders of that party are surely trying to redefine the Constitution and what it means to be American, they do not yet look to be able to hurdle this higher bar.