Did you hear about the overturned fruit truck? 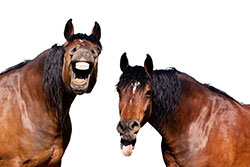 It caused a traffic jam.

Why did the bicycle fall over?

Because it was two tired!

Why did the prune go out with the raisin?

Did you hear the one about the roof?

It is probably over your head anyway.

Did you hear about the corduroy pillow?

You didn’t hear?  It made headlines.

Why do they call them light bulbs?

Because they don’t weigh much.

Why did the tomato’s face turn red?

It saw the salad dressing

Did you hear about the pony with a sore throat?

He was just a little hoarse

What is a Pirate’s favorite letter?

Did you hear about the impatient hat?

It went on ahead

What do you get when you cross an elephant with a rhino?

What do you call a fish with no eyes?

Fsh
What do you call a deer with no eyes?

What did one eye say to the other eye?

Between the two of us, something smells.

Did you hear about the man who fell into the upholstery machine?

Did you hear about the scarecrow who won a Nobel Prize?

He was outstanding in his field

Did you hear about the cheese factory that burned down?

All that’s left is de-brie

These two muffins are sitting in an oven, one turns to the other and says, man, it’s really hot in here.  The other one looks at him and says, “OH MY GOD IT’S A TALKING MUFFIN!”

Where does the little king keep his little armies?

In his little sleevies.

Why didn’t the lifeguard save the hippie?

He was too far out.

How do you light up a Tennis Stadium?

With a good match.

What did the grape say when it got stepped on?

It just let out a little wine.

Because he was completely pointless.

How do you throw a party in outer space?

What do you do when you see a space man?

You park your car man.

What is the difference between a piano, a tuna, and a pot of glue?

You can tuna piano, but you can’t piano tuna.

What about the pot of glue?

I knew you’d get stuck there.