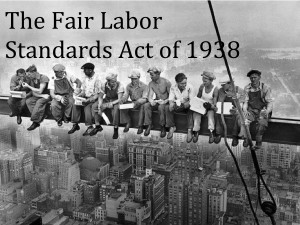 For much of the controversy surrounding the New Deal in the 1930s, one of the major accomplishments on behalf of American workers was a federal law called the Fair Labor Standards Act (FLSA) of 1938.

Much of the current labor laws and worker benefits established by federal and state laws are traced back to this landmark legislation, which has been effective with very little updating or amending over its 80-year history. The law was a sweeping decree, affecting not only government workers but also workers with private companies – which made it one of the more expansive laws passed during this time known as the Great Depression.

Much of what is on the books regarding overtime, the minimum wage, and child-labor laws are based on this Act. The rules contained in the law are applied to all part- and full-time employees of private and public workforces which are deemed to be overtime-eligible – which means they are positions which are eligible for overtime pay or “comp time,” or days off, in compensation for hours worked over 40 in a single calendar week.

Each individual human-resources office were charged with determining overtime eligibility for the positions within the firm, and that deemed eligible would have a hours-worked record kept for ensuring compliance with the law.

The law does not have any requirements regarding vacation or sick leave, pensions or retirement accounts, health or other insurance, or any requirements for holiday pay. There are also no limits on the number of hours that a person would be required or scheduled to work in any single day, nor on the number of total hours in a week that a person can work, as long as hours past 40 are paid at 1.5 times the regular wage.

There were also provisions that required that minors at least age 16 should be paid a minimum wage, and no child under 16 years old was allowed to work during normal school hours. Those minors under age 18 were prohibited from working certain dangerous jobs (as defined within the Act), as well.

Over the years, there have been some “tweaks” to the law, including re-defining those employers that are to be under the jurisdiction of the law, and adjusting the federal minimum wage, either to a set amount or adjustable according to the rate of inflation.

There are positions that are officially deemed “exempt” from the provisions contained in the law, and they are defined as legitimate administrative, management or outside-sales positions. These kinds of positions do not have minimum-wage requirements nor overtime pay for excessive hours worked.

The Fair Labor Standards Act has served as the foundation for hundreds of millions of jobs that have been filled over the last eight decades.  The law has helped create perhaps the most dynamic economy that the world has ever known, and has created working conditions that can be the envy of other workers around the world. While it’s not perfect, it has been an enduring piece of legislation that has contributed to America’s greatness, and the development of a vibrant economy.