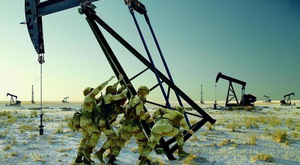 In an article posted, an apparent first-time author at Gigo accused the United States of unfairness in its war with Iraq.

Now I will be the first to agree that the United States is not a perfect country, nor is anything in life always fair. However, some of the bases of these accusations of unfairness are more than technically inaccurate — they are absurd.

Mr. Warren makes a good point about the Iraqis after the Gulf War. We made the mistake of allowing Saddam to retain helicopter overflights in the no-fly zones, and he used them to devastate uprisings in the Basra, Mosul, and Kirkuk regions. It is the second part of this paragraph that leaves little to be desired.

Under the thesis proposed by M. Warren, we made an ethical and moral mistake when we failed to apply to Russia for old T-55 and T-62 battle tanks before going to war with Iraq. In place of precision guided munitions, it was our moral obligation to have launched Scud missiles and Chinese Seersucker missiles into downtown Baghdad, causing countless more civilian casualties than were inflicted in either Gulf war. In the name of fairness, instead of our M1A1 battle tanks and M2/M3 armored vehicles, we should have had taxicab drivers and pregnant women blowing themselves up at Iraqi checkpoints. In lieu of our ‘Thunder Run’ drive into downtown Baghdad, we should have loaded vans with women and children, and sent them flying at full speed into units of the Special Republican Guard.

Finally, in place of our helicopters and anti-tank missiles, it was our ethical duty to have loaded pickup trucks, school buses, and sport utility vehicles with explosives and suicide drivers, and sent them charging into the sides of Iraqi T-55 and T-62 tanks.

Instead of attacking Al Qa’ida with precision missiles, special forces, the 10th Mountain Division, and the United States Marines, we should have hijacked a civilian airliners with box-cutters, and sent them screaming into downtown Kabul.

We did not do these things for two specific reasons:

It occurs to me that in his article, Mr. Warren confuses two separate and distinct issues:

Without addressing at this time the issue of the over justness of the cause of Operation Iraqi Freedom, most people would agree:

In Operation Iraq Freedom, the United States and its partners did these things. We captured thousands of Iraqi prisoners, and to each of them, we provided food, water, sanitation, and medical attention. With respect to collateral damage, it happened, as it always happens in war. However, the historical record will reflect that our armed forces went to lengths never before seen in warfare to avoid minimize such instances.

The important thing to observe here, is that the definition of a fair conduct in war, is precisely the opposite of what Mr. Warren proposes. His argument would be the substance of high comedy, were it not tragically pathetic.

Note to Gray 6, on the topic of Iraqi Debt: