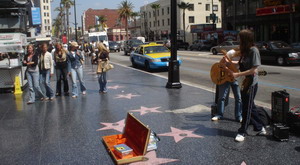 Somewhere up in the Great Beyond, Frank Capra is desperately trying to get a message to Steven Spielberg. “My word Steven, this the the greatest opportunity a director can have. America is at war, she needs you. Empire of the Sun, Private Ryan, Band of Brothers, you know what to do. Pick up your pencil and get cracking.” But Capra’s plea will never be heard by Steven Spielberg, or George Lucas or even Ridley “Blackhawk Down” Scott.

America is at war. Deny it if you will, but 3000 Americans were slaughtered on 9/11 and the occupation of Afghanistan is nothing more than a good start. International Islamo-fascism is every bit as threatening to American survival as was European fascism, Japanese Imperialism or Soviet Communism. What America needs is a new crop of film makers to educate the population. America needs to see the face of the enemy. To understand in the gut that this is a fight to the finish. There will be no rest for our nation until the enemy is certain that any attack on the nation will be met with absolute force.

Hollywood has changed in the last 60 years. At one time the industry was dominated by the production power houses of MGM, Warner Brothers, Paramount et al. The name of the game was just that, production. Studios were no different from General Motors. Hundreds of films were cranked out in assembly line style. Studios maintained rosters of actors, actresses and production personnel and employed their skills no differently than “Engine” Charlie Wilson, churning out a continuous stream of products for the movie going public. Good directors like Howard Hawks might be adapting a screen play, directing a comedy and editing a mystery all at the same time.

Hollywood doesn’t work that way anymore. The star system is long gone. Studios no longer mass produce movies. Most studios today are nothing more than pools of venture capital and fixed assets searching for scripts, stars and directors. The true power in Hollywood is held by a small coterie of gifted directors and producers who can develop a hot property and put together a “deal”.

In 1942, General George C. Marshall was told by his staff that American soldiers did not understand what they were fighting for. A rather startling revelation considering the Japanese attack on Pearl Harbor and the mounting losses in the Atlantic shipping lanes. What the Army discovered was that while soldiers understood the basics, they had no broader appreciation of the reasons why America was at war. Sure, they knew Hitler was a bad guy. They knew that Japan had occupied the Philippines and invaded New Guinea. But where did Hitler come from? Why had the Japanese attacked Pearl Harbor.

Into the breech stepped Frank Capra. As one of the most popular and populist directors of the 1930s Capra had gained a reputation for making movies for and about the common man. Marshall asked Capra to create a series of films about America at war. The end product, Why We Fight, is arguably the greatest achievement of American film and propaganda art. Lest you be confused, I am not using propaganda is a pejorative term. Advertising for Chevrolets is propaganda. All too often when you hear the term you think of Josef Goebbels spilling venomous attacks on the Jews or Castro’s claims that Cubans enjoy world class health care.

Capra’s series is nothing more than the truth. He searched for a long time for a means to present this information to the American soldier. Americans were the pre-eminent movie going nation in the world. They would not be easily misled with boastful claims of American superiority. Instead Capra turned the tables on the dictators. He used their own words to indict them. He explained in detail how they rose to power, what their goals were and contrasted that with a vision of America that was a common cultural belief of 1940s America.

So, who will be the new Frank Capra? Who will pick up the torch of liberty and carry it into the night of terrorist darkness?

America deserves to have its story told in a clear, compelling and accurate movie. I’m not asking directors and actors to mold the facts to fit pre-conceived ideals of some Lake Woebegone America where all God’s children are free, well fed and above average. I’m simply demanding that some creative person tell our story. The story of how we got here, of how we can triumph. The story of American ideals such as liberty, acceptance and determination in the face of evil.

I think Hollywood will continue to fail us. You have seen it already. For one brief moment after 9/11 the singers, actors and directors did join together to raise money for the murdered men and women of New York and Washington. But since then has anyone in Hollywood dared to speak the truth that evil is triumphant when good men do nothing? Instead we get a constant stream of vitriol from actors and directors whose opinion only has value because they appear on Entertainment Tonight. Yes, they are very careful to attack the President and the oil barons who “run” America while paying obeisance to the shibboleth that “our boys” must be supported. But their actions speak louder than their words.

Bob Hope, who used to spend every holiday in war and peace entertaining “our boys” started on that path in the Spring of 1942. On a whim he accepted an invitation to perform for a group of airmen at March Field outside Los Angeles. It was, for him, one of the greatest experiences he ever had. A captive audience of thousands of GIs who laughed at his jokes and applauded his appearance. He was bitten by the bug and spent the next 40 years from Greenland to Da Nang bringing a little piece of home to service men and women overseas.

Have you seen Susan Sarandon doing that lately? No. From the comfort of her cocooned existence she flits from film to play to TV studio, with an occasional stop to berate the President. Has she or anyone proposed making a film to tell the “real” story of 9/11? No, they can’t even do that. Because making such a piece of dreck would require “work”, commitment to an ideal that would be soundly rejected by most Americans. Instead, Richard Gere and the others pontificate from their ivory towers of privilege while good men and women go about the serious business of protecting the nation.

All that I ask is that someone, somewhere take up the fallen banner. Tell the story. Americans are tough and pragmatic people. Who know there are warts and we should not be ashamed to see them on the screen. But there is much more to the American story.

Things that make Americans proud. Instead Hollywood feeds us drivel where nuclear weapons are exploded on American soil by Arab terrorists backed by the same right wing nut jobs who knocked off President Kennedy in Executive Action.

It’s time for Hollywood to take some responsibility.

From those to whom much is given, much is expected.