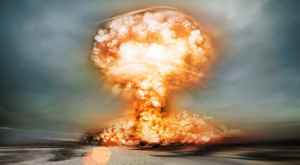 "If we have a look at deontological theory, Locke would say that we’ve already violated our ethical position through killing people without just cause. A "pre-emptive defense" is immoral, as it deprives people of their god-given right to life. If they had actively attacked us first, such an action may be considered moral, depending on the circumstances. However, it cannot be considered moral if they have not attacked first. End of story."

This example is NOT accurate when it is applied to a state or nation. First, innocent people will die in war. That is a given. Under this doctrine then, war would NEVER be permissible. What actually occurs is that the STATE takes actions which will result in it’s citizens being deprived of their God given right to life.

This can be easily demonstrated. Assume for the sake of argument that Iraq DID attack us. Is there any way to be sure that our fighting back will NOT lead to the death of someone who was innocent of the attack? No, of course there isn’t, but the war would still be just.

Now, we have to look at the current situation. The government is tasked with the protection of the people. The act of self defense does NOT require you to be hit first. If someone throws a punch at you, you are well within your rights to counter and hit them first. It is the intent of the attacker that justifies your defensive actions.

In a conventional setting, we would see a country massing it’s troops or firing a missile. At some point along this line, we would determine that their actions are hostile and we would be morally correct to defend ourselves even to the point of launching a preemptive attack to defend ourselves. This is justified both philosophically and by international law.

Now, with the introduction of bio-chemical weapons and the use of terrorists, the paradigm changes subtlety but profoundly. We KNOW that they are going to attack us at some point, we just don’t know where they will attack, or when they will attack, or exactly how they will attack or who will actually do the attacking. What we do know (as best we can) is that Iraq is developing the weapons themselves and they have ties to groups who would use them against us.

As they don’t officially declare war against us or stick to military targets, then it is a justifiable defense to prevent them from being able to attack us. We MUST do this simply because there is NO OTHER WAY to defend against such an attack. If a country masses troops, we can bring up our own forces to deter them.

What deterrence is there against a small group of people smuggling Ricin into New York and releasing it in the subway system? The only way to prevent the attack is to go after those that would enable the action. That would mean you go after the terrorist groups and those countries that support them. And yes, it IS a just war from a philosophical perspective.

We gave Saddam TWELVE years to comply. All he had to do was to demonstrate that he had no WMD’s. The South Africans flew in and tried to show him how to comply. He chose not to. According to Oriental philosophy (not sure which one precisely) taking no action is itself an action. By this, Saddam’s actions predicated our response which was one that we HAD to do in order to protect ourselves.