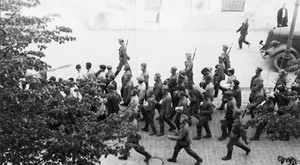 In 1925 E. M. Hemingway published the short story Soldier’s Home. It begins, "Krebs went to the war from a Methodist college in Kansas." In the fifth paragraph he writes of coming home:

"His lies were quite unimportant lies and consisted in attributing to himself things other men had seen, done or heard of, and stating as fact certain apocryphal incidents familiar to all soldiers. Even his lies were not sensational at the pool room. His acquaintances, who had heard detailed accounts of German women found chained to machine guns in the Argonne forrest and who could not comprehend, or were barred by their patriotism from interest in, any German machine gunners who were not chained, were not thrilled by his stories."

Jack [Bumby] Hemingway is credited with being the first OSS officer to parachute into occupied France with a fly rod. It was his home country. Jack was captured and presumed dead until he was found in a German POW camp. All Americans know what German POW camps were like. Colonel Hogan cracked wise and made fun of his captors. Klink and Schultz were dolts. The war presumably ended and everybody lived happily ever after including the Nazis.

By now, everybody has some idea of what Vietnam era POWs suffered. 1] Five years in the box with broken legs at the Hanoi Hilton like John McCain. 2] Months in a half-submerged tiger cage with intermittent games of Russian Roulette like the boys in The Deer Hunter.

This week Americans extracted ten Coalition POWs from and around a ‘hospital’ in Iraq. Thankfully, one was alive. This gracious nineteen-year-old endured hard duty.

She was kept alive by her murderous captors as a trophy. Her survival and rescue is a miracle story. God bless her. The events surrounding her capture and captivity, one may assume torture given her condition upon extraction, remain unknown. They may be classified. Left to her own, I suspect Private Lynch would tell a true and unembellished account of her ordeal. This would be welcome to some but would disappoint many. The press, never satisfied with facts, credited her [torture, broken bones, watching mates tortured and killed before her eyes and kryse-nose what else being insufficient] with taking multiple Kalashinkov rounds [there would be no other kind] and being stabbed in close-quarters-battle before submitting to capture. Oh, and only after she exhausted her ammunition slaying Death-Squadders wholesale, much in the manner of Ralphie Parker dispatching Black Bart and his gang from his kitchen window by shooting them all in the rumps with his Red Ryder Daisy BB gun [with a compass in the stock] until they all lay in his back yard with Xs where their eyes would be. Many back here in CONUS are already awarding her Hero status inluding a Silver Star. Blogger LT Smash envisions a MOH.

Why not? It would be a gas for many to see it, if only to see Shrub salute her. Don’t get me wrong. She certainly deserves much. I will be interested to see what she accepts.

In late Summer 1997, my buddy Brian enhanced his employment worth by 80% and took a job up in Concord, NH. From his office window he can see a Revolutionary War cemetery. His old office was vacant. It was rumored that an old codger from Orlando was coming down to take his accounts and work out his time until retirement. When the old codger arrived, his named turned out to be John and he reminded me of nobody as much as my Maternal Grandfather [30 years before]. John is a wizard stock-picker. I would join him for lunch in the company lounge each day. John worked to keep his hand in and to fill up the days. One day at lunch he gave me a typical inegmatic tip.

"Stock price? Or paper and oil themselves?"

"Paper and Oil prices themselves."

Before an hour had passed, Bloomberg announced inflationary trends on the crawl.

Turns out John is a Veteran. Korea. He told me a lot about it. Unremembered are the Korean War Vets and the story of their POWs is shameful. Now. Some of we GIGOers may rent, or even own, a copy of The Manchurian Candidate. This does not help. The very real truth is that returned and returning Korean POWs found life complicated by the usual problems of re-adjustment. [Rent and watch the WWII era "The Best Years of Our Lives."] Korean War POWs were shunned, unemployable and viewed through the Cold War prizm of suspicion. Each was presumed to be a Brainwashed sleeper Communist who could not be trusted with letter-openers or decks of cards. [Not to mention the company till.] Each was presumed to be walking around awaiting a subliminal key to trigger a post-hypnotic suggestion which would cause them to subvert and quite possibly kill and maim. See the "I Spy" series episode "Wherever I Hang Myself is Home" which [incidentally?] features the great actor Henry Silva again as the Bad Guy.

Happy we are that PFC Lynch is alive and in the USA. I will sit on my hands and see how this shakes out. I hope that her simple modesty sustains her and she is not ruined by events to come, especially as she has survived so much already.