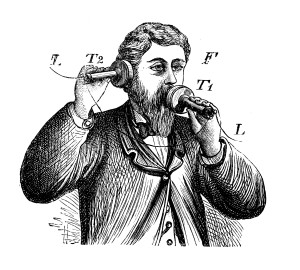 Arfarfanarf:  If someone is described as Arfarfanarf, chances are that they are in inebriated. The word “arf” on its own was slang for a half pint of beer.

Batty fang: Batty fang was a term popular among the poor in London meaning to beat someone up.

Daddles: Another word for hands.

Dimber Damber: Although it has positive connotations, there was no explicitly defined meaning for dimber damber. It was the opposite of “namby pamby.”

Door knocker: A specific style of facial hair resembling a door knocker. Similar to a goatee with no hair on the chin.

Fly rink: A person with a shaved head is sporting a fly rink.

Gal sneaker: A man who devoted most or all of his time to seducing women would be a gal sneaker.

Leaky: A person referred to as leaky is a talkative drunk.

Mind the grease: While walking through a crowd, a Victorian might ask someone to excuse them or to make room, or they could say “mind the grease.”

Nanty narking: A great time, usually at a tavern. Interchangeable with “beer and skittles.”

Podsnappery: Used to describe a person who is determined to ignore anything objectionable or inconvenient. Such a person acts superior to others.

Sauce box: A mouth. Could also be called a “tatur trap.”

Skilamalink: When dealings are referred to as skilamalink they should be avoided. These are likely held in secret and with questionable moral purpose.

Thingembobs: A common name for trousers. If they were particularly tight, they might have been called “gas pipes.”

Umble come stumble: Said when a concept is understood

Whooperups: Those who sing poorly and loudly.