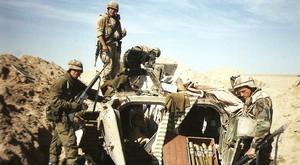 The collapse of our planned northern axis of advance from Turkey represents some interesting challenges to war planners in the Gulf. But some key issues raise interesting questions.

Is it dependent on force readiness? Logistical support?

Lacking that insight we are forced to rely on history, precedent and scientific wild ass guessing. Historically, no commander wants to attack a fixed enemy on a narrow front. Most generals attempt to place a threat in another direction. Flanking moves or airborne assaults are traditional means to keep the enemy looking in more than one direction. The addition of air power adds a different but similar dimension. Over the years we have refined our use of air power. In W.W.II we learned the value of tactical air as “supporting artillery” but we also learned the value of interdicting the enemy’s lines of communication and the value of what is now called “deep attack”. It is far more effective to destroy enemy forces when they are on the move in the rear or in fixed positions where the risk of hitting friendly targets is not a concern.

One thing I keep coming back to in my thoughts is the value of deception. The lesson of Operation Fortitude is the prime example. There was no question that sometime in 1944 the Allies would invade France. That was a given. Proceeding from that obvious conclusion the Allies focused energy on convincing the Germans that the invasion would go in at the Pas de Calais. Aside from the creation of the First US Army Group (Patton) and all the dummy tanks, camps etc.; the Allies made a deliberate decision to use their resources evenly across the Channel. For every bridge that was destroyed in the vicinity of Normandy, one was destroyed behind the Pas de Calais. Similar splits were made in the application of beach recon, the use of the Resistance, attacks on German units etc. All designed to reassure the Germans that the Allies would follow the logical course, taking the shortest distance from Britain, and the shortest distance in France with the benefit of ports.

We all know how it turned out. The reason I emphasize this point is because I’m wondering how you would go about doing this in today’s world. Do you do it with words? Actions? Spies? In order to have an effective deception plan you must have a viable and realistic plan to start with. The option of going into Calais was logical, viable and from a military stand point the “best” option. So it was in effect easy to convince the Germans to buy something they would have bought themselves. Can you do that with Iraq?

Or maybe I’m just misreading the thousands of communications emanating from Washington, New York, Centcom, Turkey, Israel and all the other interested parties. It just seems to me that a cacophony of divergent voices, each speaking with some presumed level of expertise or knowledge might be the best means to hide our true intentions. Force the Iraqis to pan everything for a few nuggets of gold.